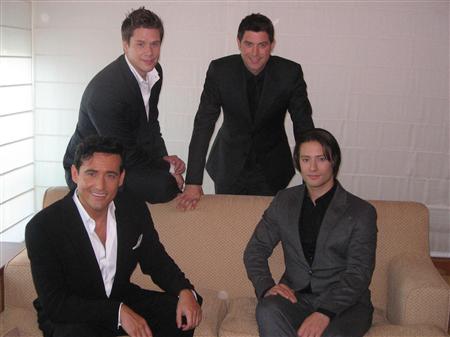 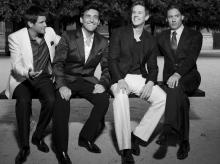 From Divo Diary
Hi there,

The last week has been kind of nuts as we've been travelling between
Switzerland, Toronto, Japan, the UK...we have a perpetual sense of being
three seconds behind reality at the moment!

It was great to be back in Japan as I've always had a fascination with
Japanese culture, and the fans who turned up to greet us at the
airport gave us a really good reception, they certainly haven't forgotten
us over there! As many of you know, I have been learning Japanese for
a while, but it's one of those things where we go there so infrequently
that by the time I get back around to studying again I forget everything
I've learned before. I've been going through three or four chapters from
a study book, and every time I have to go back and re-learn them,
so I've getting really good at those particular chapters! I know a handful
of phrases now, enough to make anyone I attempt them on raise their
eyebrows and say, oh you're learning Japanese, why's that?!
I will definitely have to push on through before we go back for the tour
in the fall so I can get good.

I would love to be able to report more about the trip but we didn't have any
time to experience the local culture while we were there. We were doing
one morning TV show and we had to go in at 4am to have a soundcheck and
get everything ready. After 45 minutes we had everything exactly where we
wanted it and all the levels right, but nobody pushed the button on the
sound desk to set it all, so when we came back to perform they had all been
reset, which meant that the music came in halfway through a verse,
we couldn't hear ourselves properly, and this was all on live TV! We were
thinking, what the heck do we do now? and that's when you hope all the
professionalism kicks in. We ended up having to say, sorry, there have been
some technical difficulties, we're going to have to start over, and we did it
again and it went really well. That's what I call one of the joys of live
performances! There's nothing you can do to help the guy behind the desk,
the TV monitor guy, all you can do is sing! （この後は省略）

All the best,
David